Where does the road to Hell begin?

What happens when your son turns homicidal overnight and your husband disappears on his way to work? Do you cower in fear or fight for your life? Madison Wescott fights against the odds. Distrustful of a God she doesn’t believe in, she finds herself face-to-face with a world she didn’t know existed and discovers her own soul is darkened with demonic connections.

With good intentions? Or by demonic design?

Phoenix Birmingham bursts into Madison’s life in a whirlwind of sarcasm and sexual appeal. A hero for the masses—and for her jaded heart—but few will ever know the sacrifices he has made or the sacrifices to come. Discovering her entire life has been influenced by multifaceted paranormal beings, Madison is determined to defeat the apocalyptic blueprint fate has decreed, but only one man dares to challenge the supernatural forces manipulating them. Even with Phoenix’s aid, can destiny be denied? Or will demonic design prevail while they pay the crucial price with their souls?

In a small, sleepy Alabama town the battle for mankind’s liberty has begun...

Demons, fallen angels, succubus and adrenaline rushes, oh my! Gracen Miller delivers a phenomenal tale of the courage and sacrifice that a mother must endure for her only son.

In a small Alabama town, Madison Wescott is struggling to raise her son, Amos, alone. Her fight isn't just about bringing up a good southern boy. It's about keeping her five-year old son from slaughtering her like the many neighborhood pets that she's already buried in her backyard. Desperate to find a cure for Amos' sudden behavioral change, she seeks out the help of a psychic and her family, the Birminghams.

Phoenix Birmingham and his uncle arrive at Madison's door just as one of Amos' sudden attempts to kill his mother is in effect. As Amos' fiery eyes, glow with murderous intent, Phoenix realizes that he and his family are in for a long ride on the "Road to Hell". Will it be Evil that claims victory this time around?

Pandora's Box is a fast-paced and unpredictable work of art. Miller paints the story with the finesse of a renaissance artist's brush and the boldness of a warrior's deadly strike. This book will leave you scorching in anticipation for the next installment in the "Road to Hell" Series. 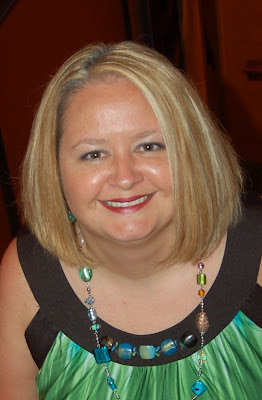 Gracen is a hopeless daydreamer masquerading as a "normal" person in southern society. When not writing, she's a full-time basketball/football/guitar mom for her two sons and a devoted wife to her real-life hero-husband. She's addicted to writing, paranormal romance novels and movies, Alabama football and coffee…addictions are not necessarily in order of priority. She is convinced coffee is nectar from the gods and blending coffee and writing together generates the perfect creative merger. Many of her creative worlds are spawned from coffee highs.


Learn more about Gracen Miller and the Road to Hell Series on Facebook and on her Website.