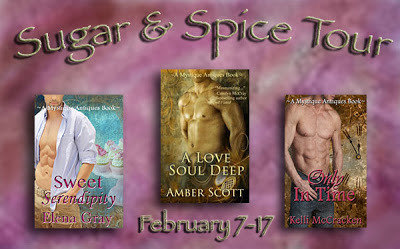 Only in Time A Love Soul Deep

*Aside from the Rafflecopter Giveaway, you can WIN all 3 ebooks by leaving a short note for the authors and your email on the Comments section of this post!

(Elena) Kelli and I had an amazing paranormal experience last year when we were at the Desert Rose Conference in Arizona with Amber.

Things went amiss not long after our arrival. Since Kelli and I shared a suite at the conference, we witnessed this craziness first hand.

(Kelli) You arrived at the conference before I did. I think you’re the one that started it all. Justin had a thing for you...

(Elena) Hush. Let me tell the story So, after our first night there, I wake up the next morning and go into the bathroom. All of the towels that were on the shelf had fallen on the floor. I just assumed Kelli had gotten up through the night and done it accidentally. Or she had too much to drink and decided to redecorate.

(Kelli) Redecorating is the last thing on my mind when drinking. But back to the story. What was even stranger is that the room we were staying in was at the very end of the building. We couldn’t blame it on the person in the next suite because the bathroom was on the outer wall. So no slamming doors could cause the towels to fall. Creeped out yet? Keep reading...

(Elena) The next day we had to switch rooms and they put us in a room where we had to share a bed.

(Elena) Um. Yeah...Could have been kinda awkward. We went to sleep that night and I heard a clapping sound. I thought it was Kelli. I asked her what she was doing and she said she thought it was me.

(Kelli) Yep. I thought Elena had a compact in her hand and had closed it shut. She thought I was trying to use the old “clap on, clap off” method for the lights. As if... ~_^

(Elena) Ha! Then I heard someone breathing in my ear. That really freaked me out. I told Kelli there was someone uninvited in bed with us.

(Kelli) It was more like, “Holy Sh*t! Something’s in bed with us.” LoL. I couldn’t deny it. I had a cold chill wash over me. I’ve always been sensitive to things of this nature. It felt like someone was pressing against my chest.

(Elena) I told whoever was in the room that we were jet lagged and not in the mood to play. He needed to move on and have fun with someone else. No menage a ghost happening that night.

(Kelli) She didn’t know it was a guy until I told her. Another friend who was staying in the same building came in the next morning. Being a sensitive herself, she was able to confirm what we were experiencing. She didn’t know at the time that I thought it was a guy.

(Elena) She told us that he had visited her the night before too. We asked what time and it was right after we told him to scram. (Freaky huh?) Since she’s able to ‘see’ beyond this realm, I asked her what time period he looked like he was from. She thought the 70’s maybe. Did I mention that I named him? Calling him “ghost” seemed rude so I called him Justin.

(Kelli) I tried to mention his name before you hushed me... Anyway, we asked some of the other authors at the conference if anything weird happened to them. And you know as writers we eat this stuff up. A story was already brewing.

(Elena) One of the authors said that her door kept slamming on her finger and while they were at a seminar their toilet plugged. I figured it was Kelli’s fault after she ate that burrito for lunch.

(Kelli) Um, that would have been you. *Shakes head* The ghost visited once more after that. He showed up our last morning there. Elena was fast asleep, but my eyes flew open at 6am on the dot. I had fallen asleep the night before in my clothes. (too much tequila) I had this long necklace on, and it had slid across my chest to my arm, which was tucked under my pillow. There was a vibration that spread across the necklace. Like someone was tapping it. It happened twice. After the second time, I just smiled. I knew it was Justin. That was the last we heard from him.

(Elena) When I was on the shuttle to the airport I asked the driver if anything strange happened in that hotel. He asked what part we stayed in. I told him at the back across from the pool. He said a teenage boy had tried to jump from the balcony into the pool and missed. It happened right above our room. I asked when he died and he said early 80’s. So he confirmed that our frisky ghost was real.

(Kelli) Freaky thing is, I think Justin followed Elena home. While writing this post, she had a couple ‘strange’ occurrences going on. Does this all sound crazy? Sure it does, but isn’t paranormal all about the ‘unnatural’ or ‘abnormal’ flow of things in life? Yup. Welcome to our world...

(Amber) It’s true! I heard all about this first hand within hours of it happening! Okay, so that doesn’t make me an actual witness, but still. I’ve had enough paranormal experiences myself that I rarely doubt another’s.
My latest one happened one morning as I woke my daughter up. Sunlight streamed in on her sweet little face. She was on the bottom bunk fast asleep and as I sat down to kiss her awake, I heard a noise on the upper bunk’s. It sounded like sheets rustling. Then the mattress moved, depressing and returning to normal, like a knee or rearend had pressed on it. I thought for a split second our cat must be up there.

Except we don’t have a cat.

So I popped up, thinking my son must have come in at some point to sleep in her room. Nope. Nothing. Just a bunch of stuffed animals staring back at me. But I know what I saw and heard. The rustling of sheets, a mattress indention, and that unmistakable feel of goosebumps covering my skin whenever something spooky happens.

CONNECT WITH THE AUTHORS:


REMEMBER to leave a comment and include your email to be entered to win the e-books!
Posted by Nely Cab at 9:00 PM 5 comments:

The Best Mail Call Ever!

Last year, I secretly mailed a handwritten letter to someone. I wasn't expecting a reply.

Today, I had to drop by the post office to send off some surprise swag, and I decided to check my mailbox while I was there. Well, guess what? I got a reply! I can not stop smiling.

I express my sincere gratitude to Her Royal Highness, Queen Elizabeth II and the Majesty's Royal Correspondence Officer, Madam Sonia Bonici, for thoughtfully replying to my letter. 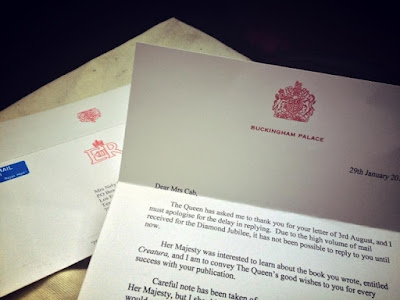 Because I wuv you guys, I'm inclined to have one more giveaway for Valentine's Day. If you haven't yet entered the poem giveaway, check out the previous giveaway post for a chance to win that giveaway, as well.

Today's giveaway consists of 3 very cute mini bookmarks. I only had a few made, so I can't offer more because these are actually what I'm sending out as Valentine's Day cards to some of my online buddies. Then I thought, HEY, what about the FANS?! I couldn't just leave you guys mini bookmark-less, could I? This is what you can win:

A Creatura Mini Bookmark
(back and front view pictured here) 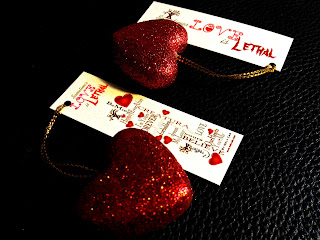 And a signed Valentine's Day Card with a gourmet lollipop 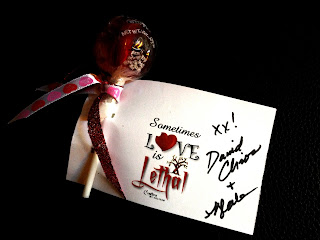 a Rafflecopter giveaway
Posted by Nely Cab at 2:13 PM 38 comments: