I was about 10 years old when I told my mother I wanted to write. She persuaded me to write a story she often told me and to illustrate it as well. I set my No. 2 pencil to paper, took out my crayons and got to work.


My mother's story was quite unorthodox and had a tragic ending, but it managed to keep me away from the stove:


The main characters were a female ant and a male mouse who were married and lived in the hollow base of a tree. The ant went to the market one day and left her husband, the mouse,  to watch over their dinner -- baked beans. The grey mouse, craving a taste of the beans in the pot, lifted the lid, fell in and died. Yes, I am sad to say that cute little rodent was boiled to death.


When I was done writing my childhood "magnum opus", or so I thought,  I acquired the address to a well-known children's publisher from the interior of one of their storybooks. Neither I nor my mother knew that it was a must to be represented by an agent for an acclaimed publishing company to consider your work. I mailed it.


Several weeks later, my manuscript appeared in our mailbox along with a letter stating that the publisher would not consider un-agented manuscripts. I was thoroughly disappointed, to say the least.


That day, as I re-read the publisher's letter,  I made a mental note: Write and publish a story before I die. That was item number two on my bucket list. Item number one was scratched off my list later that summer when I visited Disneyland for the very first time. 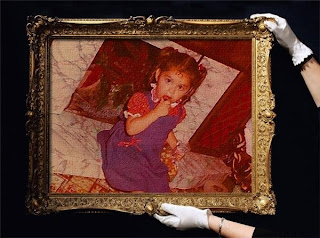 I don't remember being an avid reader as a child. I would fall asleep with opened books, somewhere between pages five and ten. At my elementary school, we were bribed with free pizza certificates for entering book reading challenges. I chose the 20 page easy readers which took me about a week to read through. I must say, I got a lot of sleep during elementary and free pizza every six weeks.


When I was a teenager I was reminded about writing again. My eighth grade English teacher assigned the class a descriptive paragraph due midway through class. We were to read it aloud to everyone and search for reactions.


My paragraph depicted my feet as they walked through fresh, grey, humid mud. I described how the smooth, dense substance seeped up between my toes and over the top of my feet. I received an "Ewww" from my classmates and an "A" from the teacher. I got an "A" in the class for the six week grading period in which we touched on imagery. I never again wrote.


After high school, I studied computer accounting. I worked at a bank for several years until I married and moved to Mexico. There, I took up culinary and art classes. After five years of residing in Monterrey, we moved back to the U.S., and I went back to work.


Two and a half years later, I resigned from my job, and I became a housewife again. It was great for the first three months, until I ran out of rooms to redecorate and crafts to create.

During the morning, I would sit and drink my coffee for about two hours trying to figure out what I was going to do with the rest of my day. I couldn't think of anywhere to go or anything do by myself in the small city in which I live that didn't involve eating. This is when I began to read and actually liked it. I was 34. Shame on me.


One day, my sister -- a conceited seventeen year-old high school senior, at the time -- pressured me into buying a movie and reading the book. She noted that the book was far better than the movie. Aren't they always?


I read the four-book series in a week. I don't remember feeding my husband or my son in the process, but somehow they survived. I was so consumed in the easy read, that I shut down the world around me for seven days. Then, it dawned on me; if this author could write so simply and still hold the readers' attention, who was to say I couldn't do the same?


I sat in front of my computer for the next two days and wrote about ten pages, before I handed it to my sister to read. When she was done, she turned, looked at me and asked, "And then what happened?" That was a good question. I didn't know. I said, "Nothing. I just wanted to see what you thought of it." She said, "It's good. Finish it. I wanna know what happens next." Her words ignited a spark.


Everyday, for months, my sister pestered me about giving her new pages to read. I sat in front of my computer for a year, working on the story for her. Every other day, I would give her more material to read and criticize. When I was finished writing, the short story I had meant to write, had turned into a novel. Being the bossy little punk she is, my sister started to pressure me to find a way to publish the book.


I decided to query agents, but gave up after an eight month period and twenty-three rejections. I actually did expect the rejections. My query letter was pathetic. I hope my life never depends on writing one.


I had heard from a couple of friends about how they had each decided to self-publish. I thought about it long and hard for about five months. All I really wanted was to hold a book in my hand that named me as the author.


The price for self-publishing is not cheap. I came across companies that charged thousands of dollars, and that caused a state of dejection in me.


While reviewing my email one day, I read an advertisement for a publishing company that knocked almost half the price off of their publishing packages and offered distribution to chain bookstores and the massive ebook market. Wide-eyed, I bought the package.


Currently, I am in the final stages of working with the publishing company, before the book goes to print.  I spent sleepless nights and nineteen-hour days re-editing and polishing the manuscript after the first submission to the publisher.


Item number two has proven to be one of the most challenging and time consuming life goals of which a ten year-old could have thought. Nonetheless, I'm happy to be entering into this new venture.