I'm excited to announce that the Deus: A Creatura Novella print edition has been officially released and available for purchase on Amazon. If you haven't read Creatura, it doesn't matter. Deus, though part of the Creatura Series, is a stand alone story that can easily be followed. Hope you enjoy it! 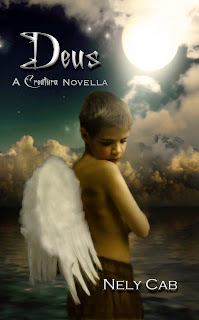 Get your copy on Amazon

ABOUT THE BOOK:
It’s the dawn of time and Deus is in charge of creating the entire Universe…only, creating things for no one but him to see is a bit pointless and truly lonesome. Deus molds Starr as a companion, but she could care less about Deus’s creations, being oblivious to the importance of it all. As if he didn't already have the entire weight of the Universe on his shoulders—literally—now, he has to deal with an irritable and beastly girl. Deus might be immortal, but he fears Starr will be the death of him. In this never-ending love story, the fate of the future is anything but child’s play…or is it? Deus is a prequel novella that expands and enriches the realms in the Creatura Series by Nely Cab. The story will appeal to present fans and welcome new admirers to its world.

WHAT REVIEWERS ARE SAYING:


Nely Cab has a beautiful way with words. She creates an amazing world with poetic language that has no rival in modern story telling. In this story she uniquely portrays the creation of the world, it's gods and the existence of humanity. ~Tia, The ShadowRealm , ✮✮✮✮✮

I wasn't sure about it at first, since it was another part of the series with different characters... But I loved it. I laughed, I cried... Definitely a must read. Now I want to read Creatura again. ~ Nix, Goodreads, ✮✮✮✮✮

If you've been keeping up with this story, then you've probably been waiting for this blog post. If you haven't yet, you might want to read Part 1 and follow the links at the bottom of each post for the following post in the series, so that you'll have a better understanding of this story.

In my last update, I gave the Anonymous E-book Pirate an ultimatum. Some of you want him/her exposed. Some of you respect the way I've been handling this. Whatever your opinion, thank you for giving me the support I needed to continue.

I'm going to be honest with all of you; I'm not the type of person to publicly humiliate and shame anyone. I wouldn't like it done to me, and I'm sure none of you would like it either. When no email came on Friday or Saturday from the Anonymous E-book pirate, I felt horribly guilty and thought very hard of what today's post would do to this individual on a personal and social level. Nonetheless, I decided I was going to stand firmly on my decision. Sunday, I woke up to find an apology from a very scared person in my email. It was from the Anonymous E-book pirate. So, without further ado, and as promised, here is the email:

I'm truly sorry for what i did.I know i don't deserve this chance, but i hope you will read this.
Never will I do anything like this again,because i know that what i did wasn't right.
I'm ashamed of my actions and i learned my lesson.I swear i won't do something like that again.
I know this isn't enough,but i apologize ,and i'll never stop apologizing for doing something awful like that.
Maybe you won't believe me,and it's hard to believe after what i did,but i am sorry.
It wasn't fair.I know it and i won't do it again.It was wrong.

I know i'm repeating myself,but i just...don't know what to write.These past days were tough,and i admit that i was scared.And i'm still scared.I know this won't be enough,but i hope that you will read it.

Once again i repeat :I apologize for what i did and i swear i won't do it again.

And to the e-pirate, I then replied:

Thank you for replying to my email. I accept your apology, and I'm sorry I frightened you. I hope you realize that you cost many authors a lot of money and if summed, the full cost of the 24 books that were on your site would be approximately $____. I want you to be aware that had it been any other author that found your email they would have surely pressed legal charges against you. I ask that you never, never do this again. Everyone makes mistakes, and I realize that this was one of many that you will make as you grow older. Thank you for saving us both the agony and embarrassment of having your picture and name released to the public. Be well and be good, my little Onyx Ex-pirate.


People tell me I've been too soft on this person, including my family. But decisions like these is what makes me "me".

I thank you for following me through this not-so-great experience. And to the former e-pirate, I say: I do hope you have learned your lesson well, Mr./Ms. Ex-Pirate, because next time, my dear, I'm not settling for an apology.