Funeral With A View by Matt Schiariti: Giveaway & Guest Post

Title: Funeral with a View

Synopsis:
Thirty-two-year-old Richard Franchitti didn’t believe in love at first sight until he met free-spirited Catherine and started a brand new life. A devoted father and husband, Richard fought to keep his family together when it would have been easier to walk away.

Tragedy left him with unfinished business.

Now a disembodied spirit, Richard relives his most important days. From the beginnings of unconditional love, to the joy of his daughter’s birth, and all of the difficult times in between, each treasured moment brings him closer to answering the question:

He was born Richard Franchitti, but his friends call him Ricky. Welcome to his funeral.

I’d met Catherine Maddox (now the widow Catherine Frachitti) through a friend of mine. My best friend, in point of fact. Bill Henly.
While they were dating.
That tidbit must sound inherently evil. There are rules, especially among guys. The Man Code, to be more specific. Every male on the planet is born with these rules branded into his DNA. Don’t date a friend’s ex, don’t have sex with a friend’s girlfriend, so on and so forth.
Let the record show that I am no home wrecker! Bill and Catherine had been seeing each other when I met her. Nothing serious, and for reasons only known to them, their relationship didn’t last. After Bill did the requisite guy thing (read: talked post-breakup smack about her), I did the right thing and asked him if he’d be okay with me asking her out.
The conversation went something like this:
Me: So, you’re not dating Cat anymore, huh?
Bill: Nope.
Me: Um, would it be cool if I asked her out?
Bill: Yeah, sure.
It was a conversation for the ages. A manly conversation of epic proportions. It may seem flimsy to an outsider, but to guys it was volumes’ worth.
I let the breakup embers fade, and a few weeks later, when I’d mustered up the testicular fortitude, I asked Catherine out. After a moment’s thought, she said yes. And the rest, as they say, is history.
Dating Catherine put no apparent stress on my relationship with Bill. Good looking in an All-American way, he never lacked for female companionship. At six-foot-five and almost as broad, he towered over my meager five-foot-eight. He’d played football in high school and college, earning an athletic scholarship to Princeton University, but blew out his knee in his second year. His spare time no longer filled with practices and games, he hunkered down and focused on his studies which paved the way to his future career as a financial advisor. Still, he remained an ever faithful workout freak. The combination of good looks, muscular build, and his large salary lured many a willing woman into his bed. Catherine was no exception, but that wasn’t entirely Bill’s doing.
The story is a simple one. Back in the day the three of us were nigh inseparable. Catherine and I were always double-dating with Bill and his love du jour. Even if he wasn’t seeing anybody (the exception to the rule), the three of us would go out to eat, see movies, hang out on lawn chairs in the summer drinking concoctions with little umbrellas in them.
It was on one such occasion when things took a change for the pornographic. I’ll never forget that day as long as I live. Or as long as I’m dead.
That day is where this story truly starts.

Matt lives in southern New Jersey with his wife, two children, and insane dog. Funeral with a View is his second published novel, but not his last.

You have been warned.

First off, I want to thank Nely Cab for taking part in the Funeral with a View blog tour. I appreciate the opportunity to post on your page.
Today’s topic is, “What do you think about this book being turned into a movie?”
What writer wouldn’t want to see their novel adapted to film, am I right? I can picture it now: Fame, fortune, swimming in an oversized tub filled with gold doubloons, lighting cigars with hundred dollar bills even though I don’t smoke cigars but would anyway just for the simple fact that I could, red carpets, hobnobbing with the Hollywood elite, winning the “Greatest Book to be Turned Into a Movie EVAR” Award, interviews with my old English teachers from high school in which they take credit for my literary genius even though I rarely participated in class, people coming out of the woodwork and claiming I owe them money. Good times. Good times indeed.
Now that I’ve taken a moment to get my head out of the clouds, I may as well discuss why I think it could be a movie.
Funeral with a View is a character driven story that takes readers on a journey through the last ten years of Richard Franchitti’s life. He’s a father, a husband, a hard worker. He’s also dead. Therein lies the twist. I killed off my main character at the beginning of the book. Don’t worry, this is hardly a spoiler as the description comes right out and says he’s a disembodied spirit. And it is a romance, make no mistake about that. How can that be? Well, Ricky’s tethered to his body and ends up observing his own funeral. As he does so, he flashes back on poignant moments in his life and tries to figure out why he hasn’t moved on. Something’s keeping him here. Will he find out what it is? The result is a rollercoaster of emotions as Ricky gives you a front row seat to both the best and worst times in his life. Love, hate, happiness, sadness, loss … as the old Ragu commercial says, “It’s in there.” The romance is in Rick’s life and how he lived it, from falling in love, to becoming a father, and all points in between.
One person who was kind enough to read and review the book compared it to The Lovely Bones and If I Stay. Those books (which I have never read, nor have I seen the movie adaptations) were made into smash hit movies, so why couldn’t Funeral with a View be turned into one? Maybe the timing is perfect and this blog topic is a portent of things to come! Or maybe it’s just pure coincidence. Time will tell. Still, what sets this apart from other books in its genre, I think, are the characters. They’re people you know, normal folks dealing with a host of problems that could happen to anybody. There are no billionaires, musical prodigies, geniuses of any kind. They may remind you of someone you know or someone you’re related to. They could be a friend of yours. They could have gone through something you’ve gone through yourself. That’s why I think people can not only relate to the book, but would be receptive to a film adaptation. It would be like viewing a friend’s life story told in moving pictures.
How would I go about getting it made? That one’s simple. Reverting back to my earlier pipe-dream state, Christopher Nolan calls me up and tells me he’s read my book and he simply must make it into a movie. In fact, he goes so far as to tell me he’ll up and quit the whole business if he can’t work with me. Not to seem too eager, I’d let him sweat it out for a bit before I said yes. Once we establish our partnership, I let him run with it because he’s a frickin’ genius, and that’s all there is to that.


So now you know what I think about Funeral with a View being turned into a movie. I’m sure you’ll all be able to sleep better at night knowing my feelings on the subject. Until such time as I’m fortunate enough to see my novel turned into film, perhaps you’d like to read it and let the movie projector of your mind put images to my words. Movies are great, but nothing’s better than our own imaginations, wouldn’t you say?

This weekend is the Houston Area Toga Party & Author Event! 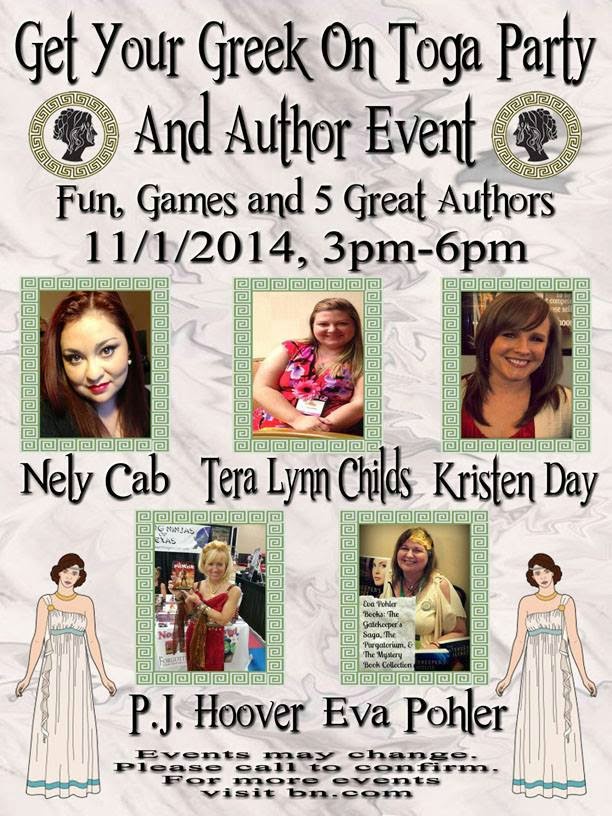 Dear Readers, People of the World, and Universal Species of all kinds:

I probably should've blogged about this earlier. Someone remind me to make an events page on the blog and my website. Where's my PA when I need her? Anyhow, I wanted to let you know that my very first Barnes and Noble book signing is taking place on Saturday, November 1st. I should probably make it a point to have more of these too. Where's my PA, again?

I would LOVE to see you there, and so would my  partners in Greek Togas. Event details follow...

Join us for a fun filled party celebrating everything Greek and Mythology themed. There will be a toga/mythology themed costume contest (family friendly please), and the authors will be picking their favorites.

All the fun things we have planned:
3PM-3:30PM Meet and Greet. The authors will also be helping readers find teams for the awesome games!

4:15 PM Author panel where you can learn about them and their books. And then onto a Q&A.

Following the author panel they will be signing copies of their books.

Barnes & Noble will have copies of each authors books on hand for sale.
Posted by Nely Cab at 6:28 PM No comments: