Jingle All the Way Book Sale and Giveaway! 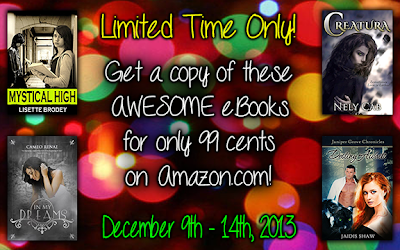 The very wonderful Jaidis Shaw has put together a great event this week and just in time for my birthday, which is TODAY! Take a look at the spectacular books we're showcasing and pick up one or all of them! Don't forget to scroll all the way down for the fab giveaway!
Just in case you're wondering, I'm 97 years old today, but I don't look a day over 89.
xo,
Nely

Get your copy of Mystical High on Kindle!

In Mystekal, a small, dying town in the Southern California desert, only 75 students attend the old, sometimes creepy high school dubbed “Mystical High,” where strange things have been known to happen. Jessie Dalworth and Jinxsy Patterson are juniors and lifelong best friends. At home, Jessie deals with the pain of an absentee mother who has abandoned the family for the lure of Hollywood; Jinxsy contends with a 17th “birthday present” she never wanted or expected.
Meanwhile, at school, the unexplained activity begins to escalate when Jinxsy keeps seeing a long-haired guy in the hallway checking her out. Jessie can’t see him, but her younger brother, River, can.
Then, in English class, a stapler mysteriously flies off teacher Eve Carrow’s desk, hitting a student in the face who has just mouthed off to her. The beloved teacher is in the unenviable position of having her brute of a father as principal, so she hates sending any student to his office. As Principal Ernest Carrow begins to terrorize Eve and others more openly, something or someone unseen decides that it’s payback time.
School is getting stranger, and Jinxsy and Jessie are faced with mind-boggling changes in their home lives that complicate everything. When a string of shocking events expose explosive secrets, decades-long mysteries are finally revealed.
CONTENT WARNING: Mild sexual content and non-gratuitous profanity. Recommended age: 14+

Get your copy of Creatura on Kindle!

Isis can control her dreams. Or she could—until recently. The creature in her nightmares has been haunting her for months. As if being dumped wasn’t bad enough, now she dreads going to sleep. She decides to confront the creature and win back some of her peace; only, she finds that he’s not a monster and he’s not a dream.
A sacrifice for love, a shocking discovery and a jealous ex-boyfriend blur the lines between reality and dreams, making it hard to tell who the real monsters are.
Who would’ve known…that sometimes love is lethal?

Get your copy of In My Dreams on Kindle!

It was happening again. The dreams. The nightmares. It was something that seventeen year-old Elizabeth Hayes thought she’d outgrown; dreams that would come true; detailed premonitions of how people would die. This time she dreams about her boyfriend, Michael Young, and soon discovers that he has been found… dead.
He has not crossed over because he was murdered, and now the murderer is after Lizzy. His spirit won’t rest until she is safe. As a newbie spirit, the easiest way for him to make contact is through Lizzy’s dreams. When she dreams, it’s as if he hasn’t died.
Lizzy must learn to pull on her inner strength to survive horrifying events, and is faced with a most difficult decision. Would she risk her life to save her best friend and the very person responsible for Michael’s death?
Meanwhile, Michael learns everything he can about his supernatural gifts to help. But will it be enough to save her?
Recommended for young adult readers. In My Dreams is a YA Paranormal Romance.

Get your copy of Destiny Awaits on Kindle!

Twenty-year-old Alayna Scott receives visions around water, but even her foresight couldn’t prepare her for the tragic accident that claimed the lives of her parents. With everything she loves gone, Alayna packs up and moves to the small town of Juniper Grove in hopes of starting over.
Jayden McKnight can’t explain the attraction that he feels whenever Alayna is near, but he does know that he will do whatever it takes to win her heart. When a vampire selects Alayna as his next victim, Jayden will stop at nothing to ensure her safety – even if that means bringing Alayna into a world that she never knew existed.
Love blossoms, challenges are made and Alayna will find herself fighting not only to survive, but to understand what she has become.

And now time for the giveaway! I’d like to thank Lisette, Nely, and Cameo for offering up prizes for the giveaway! In addition, I’d like to give a special shout out to fellow author Ace Antonio Hall, author of the YA horror novel The Confessions of Sylva Slasher, for granting me access to his Zombie Pop store! Head on over to his Facebook and Twitter and give him a like/follow. His store has awesome clothing and accessories for the zombie lover in all of us!