To celebrate the 2000 followers on the
Creatura Facebook Fan Page,
I promised that I would hold an
International Giveaway
for
1 Signed Print Copy of Creatura
and 2 Mystery Prizes.

Thank you for all your support
and
GOOD LUCK!
a Rafflecopter giveaway
Posted by Nely Cab at 4:35 PM 20 comments:

A Day in the Life of Tonia Brown (+ Giveaway!) 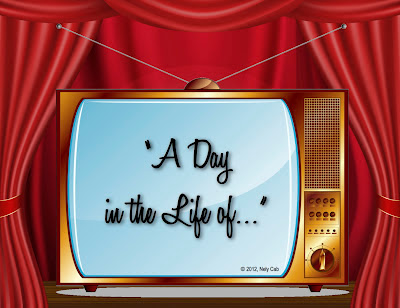 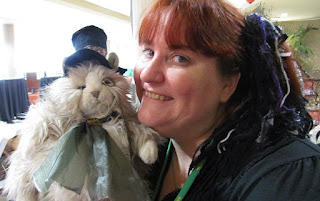 A day in the life of Tonia Brown: A day of three acts

*I decided to lay out a typical Saturday for me, seeing as how I pull ten hour shifts during the week, so most of that is sleeping and working with a smidge of writing on the side.

ACT ONE: THE AWAKENING 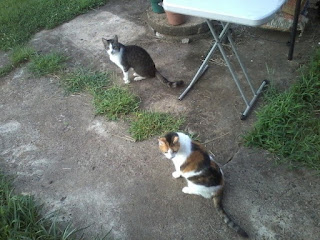 I awake with a wide yawn and stare at the faintly green ceiling. My fat cat, Princess, has fallen asleep on my arm again, leaving me to shake the pins and needles from it while I rub at my tired eyes. I am still sleepy, but I can already tell the spark of it is gone. I won’t be able to go back to that dream, which is a shame because it was awesome.
I roll out of bed—literally because that is the only way to get out of a waterbed when you are as chunky a monkey as me—and pause to glare at the glowing green numbers that light the bedroom like an out of season Christmas tree. Five am? Really? I just went to bed at one. What in the … okay. Whatever. I can deal. I do it every weekend.
You see, working third shift does that to you. Screws up your inner clock so you sleep funky hours when not on your normal routine of “eyes closed during sunlit hours, slave away in the dead of night.” I try to maintain a fairly normal existence on the weekends, else I would never see my very first shifter husband. This involves grabbing what sleep I can, when I can, and hoping everything works out for the best.

While the pot is brewing, I crank up the laptop, or Lappy as I have been known to call her. First things first, I gotta catch up on the social networks and emails. Lappy is an old gal, with sticking keys and grit in the seams and one speaker blown and runs slower than a geriatric snail on its way to the geriatric snail doctor. Seriously, do you know any species that rushes to the doctor? No. But I digress.

Facebook is full of fun and folly, but more importantly it is a sinkhole of time. I have to monitor my time there or I will spend all day shooting the sheets with folks I will never meet in person but consider close friends for some strange reason. Between likes and postings and jokes and jeers, I answer a few emails I’ve put off all week. Ah, yes, I can smell the coffee now. Halfway into the first cup I see I am just laughing at my own jokes and repeating myself, so roll up my sleeves and get to work. Mind you, I may leave the browser open in the background, and peek in every once in a while. What can I say? I am addicted to social networking.

I settle in, open the current Word file and see what is happening in fiction land. Firstly, I scroll to the last few paragraphs, and wince because it is usually garbage. Sometimes it goes, sometimes I hang onto it just to see if it works out. Occasionally it is sheer brilliance and I congratulate myself before pressing on. Pressing on consists of the same routine every single time; scroll back five pages and give it a good read, editing along the way if need be. This allows me to get back into the moment of the story, and saves editing time later on. After I read through and ready my mind, the real work begins. I start pounding away at the keyboard like I know what I’m doing. All at once, I am in the zone, the characters take the wheel, leaving me to settle in the backseat and take notes.
This is the good stuff. This is the magic.

In the middle of a crucial scene, my husband staggers through the living room, scratching his belly and rubbing his eyes and bidding me good morning. I glance up to the clock. It’s almost nine. My demons have stolen three hours from me and replaced it with a little under two thousand words. Not a bad exchange, but they will have to do better next time. After all, I’m on a deadline here.

ACT TWO: THE DAY ROLLS BY

2pm
I would like to paint you pictures of excitement and grandeur. I would like to relate tales of glory and conquest. I would love to say I spend my Saturdays chasing international criminals or feeding the hungry. But no. My day is pretty much like everyone else’s. At least, I suppose it is. Dishes, laundry, light house keeping, feed the cats, feed the spouse, shower, shave, go and get groceries, and then home again, home again, jiggity jig.
My husband and I have no children, so it stays pretty quiet at the house—save for either a movie running in the background or classic rock blaring from the stereo. We clean and talk and laugh and love. Life is good. I am a lucky woman. 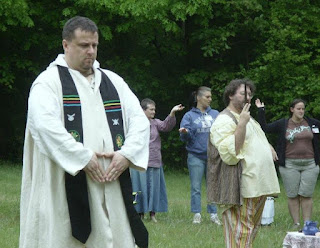 It’s a church night, so I have to clean a little more than usual and get stuff ready for folks to come over. The NCP Church of Wicca has been meeting at my house for almost fourteen years, so yeah this is way part of my regular routine. Members get here about five or so, but I can see I still have plenty of time. After my shower, and while Tony jumps in for his, I snag a few minutes to look over the manuscript.

Eh, what was I thinking? He would never say that! She wouldn’t do that! Ah well, no real time to deal with it right now.

I save the file again, then pop onto Facebook for some sinkhole time. I remind folks of the service tonight, check messages, poke a few folks (I’m looking at you, Armand!) and like some statuses. I post a thing or two. Or three. Or four. Time gets away from me, and before I know it, Tony messages me from his computer to remind me guests are arriving any minute, and I should dress. Nothing says true love like talking to your wife through IM when she is but ten feet away from you! (Seriously though, we do it all the time. It’s a running gag we both share with love.)

Thank goodness I got my pants on in time, because Eric and Edwin are here. Always the first ones to arrive, and last to leave, the Blankenship brothers are a regular household fixture. Church or no church, they are usually here for at least part of the weekend. They know they don’t have to knock, so they don’t, and with their arrival I am well on my way to a houseful of church folks.

My brain itches to deal with those problems on the page. My fingers twitch to get back to storyline. Yet I have other obligations. Writing will have to wait.Ugh! How I hate those words.

ACT THREE: INTO THE EVENING

10pm(ish)
Circle was fun as always. I had a good time, but I am tired. Folks were fed, spiritually and physically, and now they depart. The great exodus begins and within a half of an hour all that are left are the Blankenship brothers. They only linger so we can make plans for tomorrow. (We are such creatures of habit.) Plans are made, hugs are dealt, and they too slip out the door.

The husband asks if I am sleepy. Of course I am, but I remind him I won’t wind down for a bit. He smiles and nods, because he knew the answer before he asked it. He knows what I want to do. What I have to do. Tony settles at his computer to knock off a bit of some project he has been working on, or even play a bit of game. He leaves me to my duty, or the second job as he puts it.

I fire up some Tom Waits and open the manuscript again to deal with those pesky issues I noticed earlier in the day. But what happens first? That’s correct, scroll back five pages and edit as I read. This is good stuff. I am pleased. It wasn’t nearly as terrible as I first imagined. I am my own worst critic.

It only takes an hour or so to straighten out the issues and get the characters back on the right road. Which works out just fine, because I took a sleeping pill a little while ago, and it’s starting to kick in. My words blur and as does my vision. It’s time for beds.
I wake the husband, who has fallen asleep on the couch waiting for me to finish up, and escort him to bed. We settle in, and I feel good. It has been a good day. My word count was moderate, and the novel is nowhere near done, but I worked on it and that is the important thing. I close my eyes hoping that I can lay down a few thousand words tomorrow…And fall asleep knowing I will.

Thank you, Tonia, for sharing your day with us and thank you, readers for taking the time to stop by. I hope that you've enjoyed today's
"A Day in the Life of..." 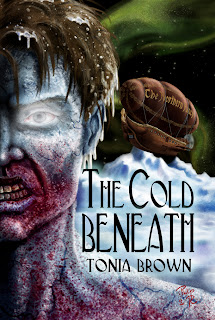 
In the race to the North Pole, who will become the victor, and who will fall to the ravages of The Cold Beneath?
Phillip Syntax is the world's best biomechanic with a checkered past of betrayal and lost love. When given a chance at redemption by the celebrated soldier Gideon Lightbridge, how can he refuse? This ill-fated expedition turns from daring to disastrous when their airship, the Northern Fancy, crashes in the far and frozen north,
leaving the crew stranded without hope.


But that isn't the worst of it.
One by one the dead crew members arise from the cold ashes to seek the warmth of the living, and it becomes every man for himself
in an effort not to join the ranks of the revenants.

a Rafflecopter giveaway
Posted by Nely Cab at 2:00 AM 6 comments: