Good day to you!

As I stated in my previous post, a filming date for The Creatura Series live action trailer has been set. Some of you may freak out about the date, but not me. I think it's a super lucky day. Everyone take a deep breath. Ready? Here goes... 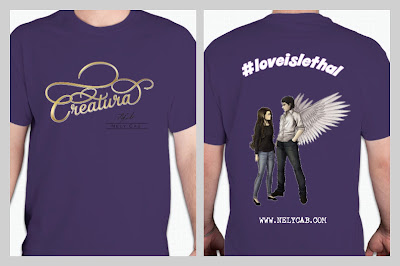 The scheduled date to shoot the trailer is
Friday, November 13, 2015.

Is anyone freaking out yet? I'll give you a few minutes to compose yourselves.

You should be good, I think. Let's proceed.

Because I've had questions concerning the process of producing a trailer, I decided to give you an insight of all the work that's been put in by Timid Monster to make this trailer happen. If you've been keeping up with me, you know that there are a lot of steps involved, as well as lots of time invested in each of these steps. So, let's recap, shall we?

First, we worked on the script. I gave Dan Baker, the director, an idea of what it was I was looking for in a trailer, and he whipped up a rough draft of the script. Ideas were tossed around, and after a few changes, the script was finalized.

Second, I licensed the music. It's a very awesome song I found by mere luck and fell in love with. I'll tell you more about the artist in another update.

Third, it was time to look for the talent. Oh man...  I believe I told you before how I obsess over every single, minute detail? If you didn't know this, now you do. Luckily, I had the best and nicest and most patient casting director to work with—Katie. I'm sure at some point she dreaded my emails, but she pulled through, like a boss. So let's take a moment to applaud and thank Katie. After all, she's the one responsible for casting these lovelies:

The fourth step was designing wardrobe for the characters. There were details, details, and more details concerning attire, props, scenes, special effects, camera speed... You name it, I thought of it, because you know how I obsess over all the details. However, I decided to be reasonable this time, though secretly, I wished I could add more. Even then, I thought I was overdoing it, because I have a tendency to over do everything. Seriously, it's even in my author bio. So there I was, thinking I was asking for too much when I told Dan what I'd like to see in the trailer. I thought he'd say, "Can't be done." Boy, was I wrong! After I told him all the ideas that were whirling around in my head, he shot me back emails adding more awesomeness to the wardrobe, props, etc. Thank you, Dan! *Wardrobe is still being worked on, btw.

Until now, this is all I have to tell you about the process of producing a book trailer. Next, we wait for the filming date, and then the editing process begins. But wait, there's more...

Q&A and GIVEAWAY:
There's a good chance that the actors can do quick interviews, if time permits. But we need questions submitted before the filming date. Are there questions you'd like to ask the cast or the Timid Monster crew? Go to my Facebook Page and ask your question as a comment. Every question gets an entry to the giveaway for the Creatura t-shirt pictured at the top of this post (sizes S-3XL available).

I told you I'd be back very soon with another update and here I am... and so is the update:

The role of David, the second lead character in the Creatura Series cinematic book trailer, has been confirmed and will be portrayed by actor Sean Carter. Sean holds acting credits in several indie films, national commercials, and award-winning theatre performances.

What do you think of our David? Dreamy enough for you?


Casting the right actors was very important to me. I want to give my readers the image of what my characters look like in my head, but also what they would consider a good fit. So, in an attempt to find an actor who fit the role of David, I relied on a handful of readers/friends for feedback when making my decision. Their reaction, "I want to pet him." That's when I knew we had a winner.

That's all I have for you today, but I'll be back tomorrow with a post about the shooting/filming date and a summary of all that's transpired. If time permits, an interview  session will also be filmed, so tomorrow, a Q&A will be opened to the public (you) on my Facebook page . You can submit questions for the actors and the Timid Monster team. I might just have a giveaway for you, too!

Write to you soon...

I'm checking in with you today with some more exciting news. The green light has been given by Timid Monster's Casting Director, Katie Baker, and I can now announce another casting update. YAY!

I'm ever so happy to report one of the leads for the cinematic Creatura Series book trailer has been cast and confirmed. Isis will be played by the stunning and talented Madison Atkinson.

Madison has modeled for ads for national retailers as well as Memphis, Tennessee local advertising. She auditioned for the role a few weeks ago, but I was a tad nervous she wouldn't be interested. So you can imagine how thrilled I was when I received a confirmation email from Katie stating Madison agreed to take the role.

What do you think of our Isis? Gorgeous, right?

You should stay tuned for more updates as they'll be coming very soon. Among these will be a post revealing the actor cast for the role of David. Also, I'll let you know when the filming date has been set so we can send the crew and cast major positive vibes when shooting.

Have I told you guys how excited I am? Pretty sure I have, but I'll say it again. I'M SO EXCITED! Are you excited, too?

As always, thanks for stopping by.