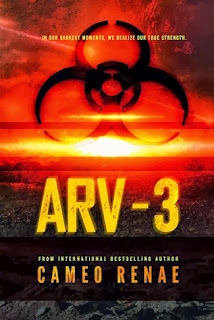 Blurb:
June 6, 2014: The beginning of the end. The Apocalypse.
A nuclear fallout wiped out every living thing on the planet, except for a few thousand of us who took shelter in underground bunkers across the globe. Now, after thirteen long years, we were finally able to return to the topside to begin to rebuild.
We thought we were alone. We were never more wrong.
Before the fallout, scientists had worked on creating an anti-radiation vaccine (ARV). The first two attempts failed, but despite the incomplete tests and results, the government approved and distributed the third serum to the masses in an effort to aid those who had no shelter.
It worked, keeping those who remained on the topside alive, but it also altered and mutated them. This new and infectious threat had completely outnumbered us. Now, we not only had to rebuild our planet. We would have to fight for it.
My name is Abigail Park. I’m seventeen, and this is my story. 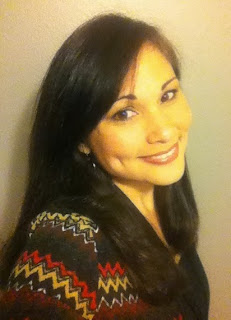 
My family is what keeps my heart beating, and my world a happy place to be.

I love reading great books that whisk me away from reality, even if for a little while. :) Writing is my passion. I love creating new worlds and new characters, and taking wondrous adventures with them.

One day I will find my magic wardrobe, and ride away on my magical unicorn... ♥ Until then... I'll keep writing! ;)

I never blog about my trips or experiences. However, this trip and experience is one worth blogging about because it was so much fun!

Austin Comic Con was held this past weekend, Nov. 22-24, 2013. My son is a huge wrestling fan and we knew John Cena would be there. Our goal was to get the kid (that's what I call him) to meet one of his heroes.

Upon arrival, it was chaos and madness. Although we had been there the previous year and knew how it all worked, this year the convention center was extremely crowded. After about 45 minutes of waiting in line for our tickets, we finally made it through the doors and into the convention. We wasted no time in heading toward the photos and autographs section of the con. Right as we walk up, who do I spy? Ralph Macchio! However, he was ready to leave the booth to go speak on a panel and the line for photos and autographs had been closed off. Sigh. Maybe next year, Karate Kid. 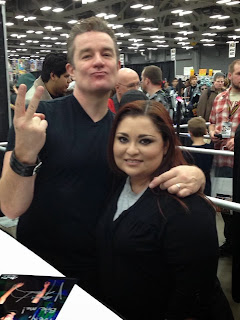 We walked, squeezing our way a little further down the aisle when I saw someone that I had been wanting to meet. Although I knew he'd been scheduled to appear, I was surprised to see that I hadn't missed my chance to meet James Marsters. The reason I was excited to see him there was because a few months ago, Isis, one of my street team members and a huge Buffy the Vampire Slayer fan, asked if I would send her a signed copy of my book to give to James Marsters for his daughter. Of course, I said yes. Soon after, she contacted me to tell me she had hand delivered the copy. I was happy and excited then.

I observed Mr. Marsters signing and taking pictures with his fans. He took the time to talk to each of them. "He seems nice enough," I thought, and I joined the rest of the fans in line. When it was my turn to meet him, he shook my hand. I told him who I was and mentioned Isis and my book. He thanked me for the book and told me that his daughter had enjoyed it. It was great to hear him say that. He and his manager, Steve Himber, equally nice as Mr. Marsters, sent Isis their regards. 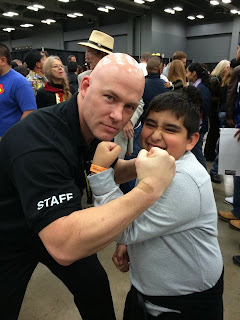 After the unforeseen Marsters meet and greet, we focused and went about our search for John Cena. At last, we found him! The line was long and wound around a few of the booths, but we waited patiently. John Cena wasn't taking pictures with the fans, but we were allowed to take pictures as he signed autographs. The kid was nervous and excited as we waited in line. He took a picture with one of the Wizard World/Comic Con staff members, Doug Brenan (pictured on left), who was very nice and kept us entertained during the long wait. I think Doug looks like John Cena, don't you? 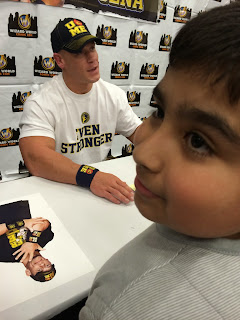 And finally, it was the kid's turn to meet the real John Cena (pictured on right). Cena didn't talk much, but he did sign the kid's autograph with "See you in the ring".  I thanked him for that and he just smiled. The kid is still smiling and happy over it.


The other celebrity I really wanted to meet was Stan Lee. You see, Mr. Lee is the creator of all my comic book boyfrans (boyfriends)...Captain America, Thor, Iron Man, The Avengers, The Hulk, Spiderman, The Fantastic Four. I grew up watching the cartoons, reading a few comic books here and there. I fell in love with superheroes from a very young age. And to meet Stan Lee was high up on my bucket list (yes, I do have one and the bucket is overflowing). 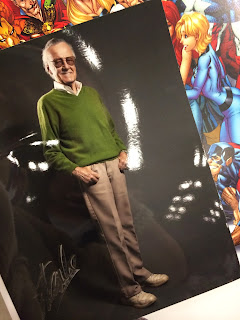 I thought I'd take a look and see if Stan Lee was signing. I didn't have high hopes of him being there as I always miss the celebs I want to meet at these cons. But to my surprise, he was there!  I didn't hesitate or care that the line was long. I stood in line and waited with a huge smile on my face. We weren't allowed to take pictures of Mr. Lee or with him. He was only signing autographs during this hour and I wasn't going to miss it. When he signed my picture, I knew it would be the only chance I got to to say something to him, and I know I must've sounded like a crazy fool, but I didn't care. I mean, I'm the crazy woman who wrote to the Queen and told her I liked her hair in the post script! But that's another story... So anyway, I took a breath and said, "Mr. Lee, I want to thank you for creating all my boyfriends. They are ALL my boyfriends." He chuckled a little and said, "Well...I'm filled with gratitude." I took my autographed picture and thanked him and left with a grin that was wider than the kid's after meeting John Cena.


And that ladies and gents, was my totally awesome Austin Comic Con experience. Thanks for stopping in to read about it. Until the next blog post...